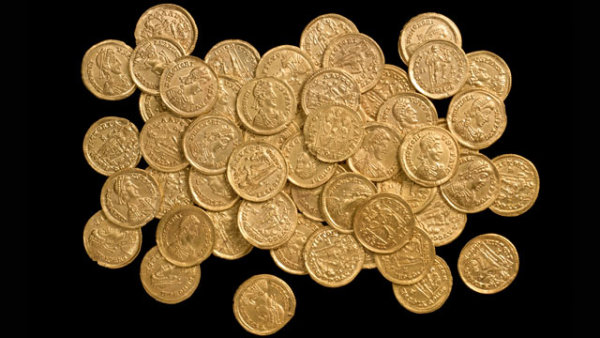 Armed with a basic metal detector, a first-time treasure hunter in Britain reportedly has uncovered a trove of Roman-era gold coins that experts believe represents one of the largest such finds in England’s history.

According to the Helmel Gazette newspaper, the man – whose name has not been made public – reportedly bought a beginner’s metal detector from a shop in the Berkhamsted, Hertfordshire, area. A few weeks later, the man returned to the shop, showed the shopkeepers 40 gold coins, and asked them: “What do I do with this?”

The shop’s owners, David Sewell and Mark Becher, were stunned. They told the novice treasure hunter to notify authorities of his discovery, the paper added. When he obtained the required permits, Sewell, Becher and others returned with the man to the discovery site.

“We went with them and took with us a couple of slightly more potent machines and we pulled 119 more coins out of the ground,” Sewell told the Daily Mail newspaper. “These are 22 carat gold, they haven’t got any damage and they came out of the ground looking like the day they were made.”

He added: “I’ve found bits and pieces but nothing like this. I’ve got immense satisfaction that the guy came to us and bought the machine from us, but I would be lying if I said I didn’t wish it had been me.”

The solidus coin dates to the closing years of the fourth century. They typically were buried as a sacrifice to gods when the owner was going on a journey or in times of war, said David Thorold, a curator at the St. Albans’ Verulamium Museum, the Associated Press reported.

The local government said the coins were found on private land. Experts at the British Museum will examine the haul to determine its final value. Depending on their opinion, the amateur treasure hunter could get at least a share of the proceeds, reports said.